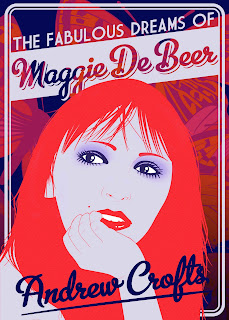 Maggie de Beer has been famously reluctant to give interviews, reputedly on the advice of her management, who worry that some of her views might not chime well with modern sensibilities. The following extract from a Q & A with a literary journalist is therefore a rare, and shocking, glimpse behind the very controlled image that she normally allows the world to see.

Q. Many readers have been shocked by the apparent ease with which you put your career before your personal life. Some have suggested that it is a very male approach to ambition.

A. Well I can assure you I am all female, but I think people forget how different things are now to when I started in the seventies. The idea then of trailing a child along behind you to auditions – I assume that is what you are talking about – was just unthinkable. If you felt you had a destiny which you had to follow then you had to be single minded about it. It wasn’t just me. It happened to Shirley Bassey and many others. We had to make choices.

Q. Giving up your child for your career is certainly one thing that people have pointed to. But not many women would be able to walk away from their families when they are fifteen and never even look back. That is a very ruthless sort of ambition.

A. Ruthless is a horribly negative word, don’t you think? I prefer “focused”. I was totally focused on what I had to achieve. I couldn’t afford to have any excess emotional baggage. Women are now coming to realise that they really can’t “have it all” – they have to make choices.

Q. Do you feel you made all the right choices?

A. Yes, of course. I’m not saying they weren’t painful. They were, but there is no point in going on about it. All this weeping and wailing that goes on now, with everyone traumatised by the terrible things that have happened to them. Bad things happen to everyone. It is just boring. You have to focus on the positive, on the beautiful, on the exciting, the glamorous if you want to be a star in the true sense of the word.

Q. Sex has played a big part in your career.

A. I don’t know about that. Sex appeal certainly has, that is all part of the glamour, don’t you think?

Q. But you don’t talk about sex in your book (The Fabulous Dreams of Maggie de Beer). Is that deliberate?

A. I don’t choose to talk about sex much anyway. It’s not that interesting is it? Everyone does it – well most people, just like they go to the bathroom each day. I don’t want to read about it all the time.

Q. But for many years you were a stripper …

A. That’s a stupid, ugly word.

Q. What word would you prefer?