The Holy Grail of Word-of-Mouth 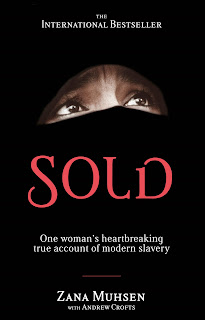 The British publishers of “Sold”, which I wrote for Zana Muhsen some twenty years ago and which has sold around four million copies worldwide, have just re-designed the book's cover. The image of the sad, beautiful and frightened girl’s eyes peering out of the burka remains but there is more black in the surround which, coupled with the new red lettering, brings to mind the vampire books which have come to dominate the shelves of book shops in recent years.

I have an enormous affection for “Sold”, partly because it was one of the first books I ghosted and partly because hardly a day goes by that I don’t receive at least one email from a reader. Sometimes they start by saying it is their favourite book of all time, (always an endearing thing for any writer to read), and that it has left them unbearably moved. They all then go on to say that they feel an overwhelming need to know what happened to Zana and her sister, Nadia, after the close of this book, and its sequel “A Promise to Nadia”, which we wrote about ten years later.
As far as I know the book has never been advertised or reviewed in any media, apart from readers’ comments on sites like Amazon. So its steady sales of around 200,000 copies a year must be solely down to word- of-mouth. People simply like Zana’s story and tell their friends about it.

Zana and Nadia were two Birmingham sisters who thought they were going on holiday to Yemen when they were fourteen and fifteen but found once they got there that their father had sold them into virtual slavery as child brides. “Sold” is the tale of how Zana managed to escape after eight years and then started a campaign to free her sister and their children. The main platform of her campaign was the writing of the book.

It is wonderful to see a refreshed cover coming out in the country where the whole thing started twenty years ago.
Posted by Andrew Crofts at 12:37