A Faff About Plath

Faber design an eye-catching cover for a new edition of Sylvia Plath’s Bell Jar and the grumbles start to rise. Literary folk who are just as likely to be complaining that their publishers are “useless as marketing” raise their hands in horror, suggesting that the Philistines have now made La Plath look like a purveyor of “Chicklit”.

At the same time Wattpad.com, a true purveyor of writing to and amongst the world’s masses, proudly prepares to launch its own “Chicklit” genre on February 11th, (www.WeLoveChickLit.com), spearheaded by the fabulous Marian Keyes, a woman who has never shrunk from any label which will help her to talk to wider audiences. (23 million books sold so far and constantly rising).

Naomi Wolf, when asked her opinion of Faber’s scarlet cover, has very fairly suggested that those who might be attracted to the book in the hope of finding something frothy within might be a little disappointed by what they actually find – but then again Marian Keyes, and other writers perfectly willing to be branded as Chicklit, also tackle some pretty depressing themes.

Personally, I love any “label” and any cover design which coaxes more people to read whatever I have written, and I had better declare an interest here and admit that Wattpad are including my novel, The Overnight Fame of Steffi McBride, in their Chicklit launch next week. I am looking forward to a great deal of correspondence on the site as a result, since connecting with readers is the whole point of coming into this game in the first place. 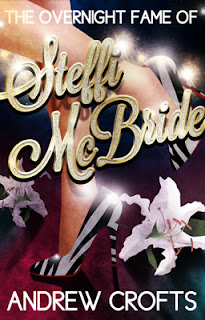