An article in today’s Times attempts to create a controversy about some books being pushed into storage at the Bodleian Library, while others are being touched by students who might, (or might not), have fingers covered in burger-grease.


The paper cites the cause of the whole problem as being the £100-million which James Martin has donated to Oxford University. Apparently it is the expansion of his Oxford Martin School which has caused this domino effect amongst the archives.

It appears to be a concocted non-story but it set me thinking as to what is going to happen to the tsunami of information that is now being stored digitally as well as in print form?

The Bodleian Group already cares for some 11 million items on 117 miles of shelving and Lord alone knows how many books are already resting on Amazon’s virtual shelving.

I don’t know what the solution is going to be, but I am quite sure that no blame should lie with James Martin and his extraordinary generosity in the cause of studying the things that matter for our future, although of course the Oxford Martin School will undoubtedly be contributing its fair share to the future knowledge tsunami - and so the wave continues to grow higher. 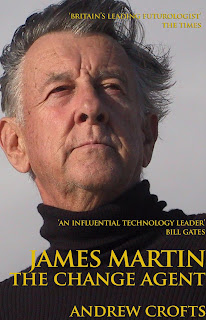